ToneBoosters has released version 4.1 of Barricade, a transparent, mastering-grade compressor and brickwall limiter effect plugin for Windows and Mac. 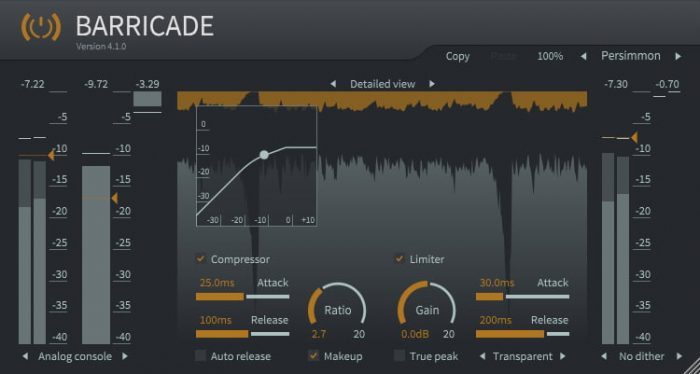 TB Barricade v4 is a simple yet very effective and transparent brickwall limiter that is suitable for individual tracks as well as mastering work. It supports digital input and output peak meters, RMS meters, and gain/attenuation meters, all with peak hold functionality. True peak / inter-sample peak (ISP) detection circuits can be enabled that are in line with EBU R-128, ATSC A/85 and ITU-R BS.1770 allow to generate true-peak compliant audio signals.

TB Barricade v4 provides various limiter modes that behave differently and can be used for creative or transparent limiting.

On top of the peak limiter, an peak compressor is included with adjustable ratio, threshold, attack and release times. This compressor uses the same advanced envelope tracking technology as used for the peak limiter, providing accurate and musically-sounding compression.

Last but not least, TB Barricade v4 sports an input modeller. This section can add anything from subtle analog or tape saturation to hard clipping to add that extra glue to your mixes!

Barricade (VST/AU) is available for purchase for 30 EUR. Barricade v3.0 users can upgrade at a discount.