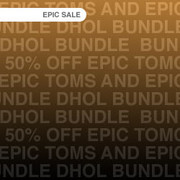 Tonehammers Epic Toms and Epic Dhols are amongst some of the most sought after instrument for composers and musician looking for that big, epic sound. Our instruments are featured in a variety of blockbuster movies, tv-shows, feature trailers and video games and set a new standard for big, epic cinematic percussion.

The libraries are build around our 10/10 standard (10 velocity layers – 10 repetition pr. layer), which allow you to play the percussion at extreme speeds without getting that repetitive machine gun feeling going. In addition the libraries are recorded in our epic hall and contain natural reverb. The libraries are programmed in such a way you can control the amount of reverb by adjusting the modwheel.