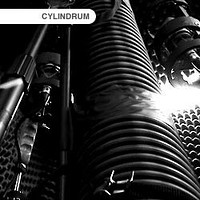 The Cylindrum is a massive custom built tuned percussion instrument ranging over 4 octaves, so a percussionists dream come true. The Cylindrum contains three separate variations of the instrument (light, dry and wet).

The light version is made from a series of 1.5 inch PVC pipes played by tapping fingers over one end, while microphones were positioned in the opposite end. The dry version was made a series of 4 inch ADS corrugated tubes with an open-ended rubber head played with a paddle. The wet version was recorded in our signature hall and has a more percussive feel then the dry and light versions – resulting in a sort of tuned tom-tom sound.

Visit Tonehammer for more information and some audio demos.