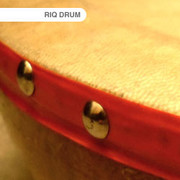 The traditional family of Middle Eastern (Arabic) hand percussion instruments is generally deﬁned as an open shell frame drum drum with large cymbals or jingle – aka Riq Drums. It is similar in appearance and origin to a tambourine, but this broad family of specialized drums is treated as a very serious and deeply nuanced instrument class in both traditional and modern Middle Eastern, Central Asian and Eastern European music. Rather than simply being an accompaniment or backing instrument, the Rik family of drums can often take a lead or solo role. The jingles, rattles or rings are often played as a discreet component of the drum, along with a broad range of unique head and rim ﬁnger and hand articulations.

For our Riq Drum multi-sample library, we captured a pair of full-sized drums, one larger 15-inch “daf” drum from Greece with metal rings and bearings (actually called a daf) and one smaller 13” riq drum from Egypt with wide tin “cymbals”. We also captured a toy frame drum that we’ve modiﬁed into a miniature riq, by adding a series of ﬁne sand-ﬁlled rattles. We’ve also included a very large collection of ambient droning and “synth” percussion instruments, created entirely through heavily manipulating the source recordings for this library.