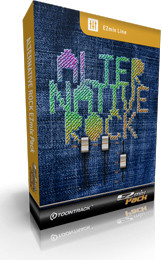 Toontrack has announced the Alternative Rock EZmix Pack, a collection of presets for the EZmix software.

Multi-instrumentalist, producer, engineer, songwriter, sound designer and programmer Chris Pitman (Guns N’ Roses, Lusk, Replicants, Tool) is back! This time with a collection presets for EZmix that will lift your rock tracks to new heights. Get creative and browse through the impressive list of presets for guitars, basses, vocals and more! Beef up your tracks with just one click!

Chris Pitman is best-known for his involvement with hard rock band Guns N’ Roses, in which he has been a permanent member since 1998, but also for his work with Les Levine, Dr. Dre, Tool, Blinker the Star as well as his own band SexTapes.

A multi-instrumentalist, Pitman plays keyboards, guitar and drums as well as singing lead and backing vocals. In addition to his many musical endeavors, he is also an artist and a co-founder of Los Angeles based Priory of the North, which focuses mainly on conceptual/public art, working with oil painting, lithography, oils and metals.

The Alternative Rock EZmix Pack is available to purchase for 25 EUR / $29 USD.