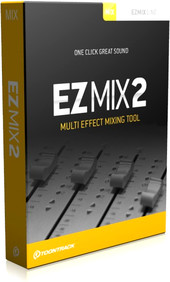 EZmix 2 introduces a completely revised and more intuitive user interface, a large amount of new presets, effects as well as, perhaps most notably, the inclusion of ready-made signal chains for guitar and bass, modeled after some of the world’s most popular vintage and contemporary amps, speakers and stomp boxes.

“A big part of our users as well as the overall music community are guitar based in their craft”, said Mattias Eklund, Toontrack Music’s founder and head of sound design. “Expanding the EZmix software in that direction is a natural as much as a pivotal step in developing the EZmix Line into an undisputable platform for any kind of mixing needs”.

EZmix 2 continues to build on the same fundamental idea EZmix introduced: the one click, great sound philosophy of mixing music. In EZmix 2, the lion’s share of all tweaking has already been made by a professional engineer and you, the user, can control the overall amount of the combined elements in each preset through two intuitive rotary knobs. As soon as you select one of the pre-designed settings, a complex chain of effect units instantly loads in the background. This makes mixing music not only easy and incredibly fast, but offering instant and professional results without infringing on your creativity and personal preference.

“Just like all our other products, we developed EZmix on the basis of what we, ourselves, were missing in order to make writing and producing our own music easier”, said Mattias Eklund. “When the idea was born, no one could really argue with it. The fact that having a one-click multi-effect tool with ready-made signal chains for all common instruments, genres and general mixing needs designed by multi-platinum business veterans such as Chuck Ainlay or Mark Needham is useful in any given situation”.

The release of EZmix 2 will discontinue the first generation of EZmix. All owners of the legacy version will be offered the EZmix Upgrade for a yet undetermined grace period.