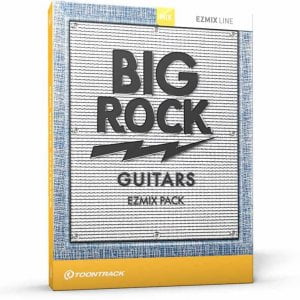 Thirty, or even forty, years ago, some guitarists hit notes that seem to resonate just as vividly now as back then. We’re talking about the icons – the flag bearers of the big guitar tones that changed the fabric of rock and whose legacy to this day keep trickling down to new generations of players across the globe.

This is where the Big Rock Guitars EZmix Pack is rooted – deep in the midst of the bursting ‘70s classic rock scene. But even if this collection blatantly nods at times gone by, it still aims to paint a picture of rock guitar as a whole, vintage or not. This is a tribute on a broader scale – to the amps, the players, the riffs and the past 40 years of guitar-driven music.

Expect all the tones you need for your deafening, tube-sizzling rhythms, your flange-infused twang and, of course, all your soaring leads. Regardless of whether you’re a writer of classic or modern rock, this collection’s got you covered.

Get your guitar out, school’s in session.

The Big Rock Guitar EZmix Pack is available for 39 EUR.

Toontrack has also announced EZmix Line promotions, offering new bundle variations as well as an option to compose your own EZmix 2 6 Pack bundle.

Available as of now is a new limited-time-only collection of added-value packaging for EZmix 2 – the core product with three (3) EZmix Packs included. This means that there are essentially three different price points for first-time buyers: REGULAR, HEAVY and GRAND.

On top of this, Toontrack is offering great deals on the regular edition of EZmix 2 as well as all previously available bundle options.

In addition, customers can now compose their own EZmix 2 6 Pack bundles directly on Toontrack’s website.

Monster Sounds Sale at Loopmasters, save 30% off on sound packs