Toontrack Music has announced the immediate release of the New York Studios Collection for the award-winning drum production tool and sampler Superior Drummer 2.0. 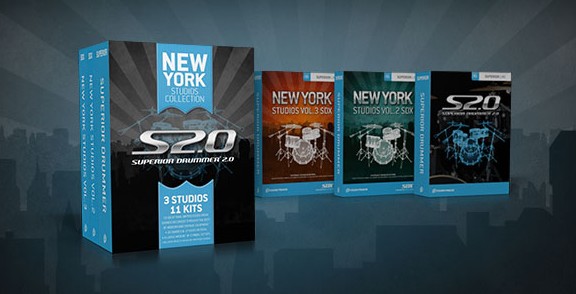 The focus of the series has been to capture the most notable and legendary studios in the New York area: The Hit Factory, Allaire Studios and Avatar Studios. These recording facilities have housed chart-topping artists for decades and are all world-renowned for their unique sonic qualities. All sounds were recorded by Grammy Award-winning engineer Neil Dorfsman (Dire Straits, Bruce Springsteen), Pat Thrall (Katy Perry, Beyoncé) and in-demand session drummer Nir Z (Genesis, Chris Cornell).

Since Superior Drummer was first introduced on the market, it has become the indisputable industry standard tool for professional drum production. The sounds from the New York Studios series are used daily in major label studio productions, motion pictures and commercials around the world. By combining this collection of drums with the powerful sound shaping tools in Superior Drummer, the sky is literally the limit as to what you can achieve.