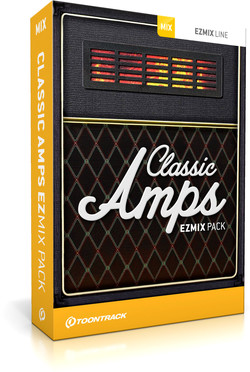 Toontrack has announced the release of the Classic Amps EZmix Pack, an expansion pack for the EZmix 2 multi-effect mix tool.

“We wanted to model the most influential amps of the past 50 years and put together a collection of tones that could work for any kind of guitar oriented music. We ended up with settings spanning anything from blues to British Invasion, punk, grunge and pop”, says Toontrack sound designer Ulf Edlund.

This collection is a testament and homage to the amps that managed to survive and seep through several decades of musical progression. The inspiration to your next riff is just a mouse-click away. Make sure it sounds great – add some of that warm tube sizzle, subtle speaker rattle or warm fuzz to it!

Some say the tone is in your fingers. We beg to differ.