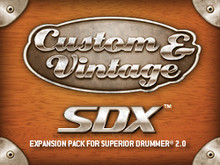 Apart from extensive stick and brush recordings of a unique collection of drums and cymbals it also features mixer presets by producer Peter Henderson and custom MIDI by drummer Chris Whitten.

The SDX™ gives everyone from top producers down, access to the cream of custom and vintage drums, built by craftsmen from the 1920s right up to the exceptional instrument makers of today, like Johnny Craviotto.

The Custom and Vintage SDX™ is played by Chris Whitten. The drummer on classic hits like What I Am by Edie Brickelland, The New Bohemians and The Whole Of The Moon by The Waterboys, Paul McCartneys Flowers In The Dirt album.

The Custom and Vintage SDX™ is produced by Peter Henderson a key figure in producing Supertramp´s 20 million selling album Breakfast In America, for which he won a Grammy. He has also worked with Paul McCartney, Rush, Frank Zappa, Jeff Beck, Tina Turner and Ringo Starr.

The Custom and Vintage SDX™ will be available as an upgrade with a special price from the legacy products and one regular SDX™ version for newer customers. Both with the same content.

The Custom and Vintage SDX will be available in stores around the world at the end of October 2009.