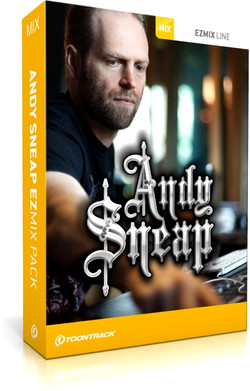 Toontrack has announced the release of the Andy Sneap EZmix Pack, a collection of presets designed by influential Metal producer Andy Sneap.

It focuses primarily on guitar and bass tones but also includes a selection of settings for lead vocals, background vocals and drums. Over the last couple of decades, Andy’s mixes have seen him rise to international fame, lent him work on albums by some of the biggest names in modern metal and overall, his skills have had an instrumental role in shaping the sound of metal as we know it in the new millennium. Andy’s discography reads like a who’s who in recent metal history and includes the likes of DevilDriver, Saxon, Testament, Exodus, Accept and Killswitch Engage, to name a few.

The included guitar and bass tones were emulated and EQ-matched against the source material from some of the most noted productions in his extensive catalogue. The end result presents a jaw-dropping similarity and gives you a multitude of options for bass guitar as well as clean, rhythm and lead guitar. Add to that Andy’s custom settings for various lead vocals, background vocals and drums and you’ll have a set of extremely powerful audio shaping tools that will add a new dimension to your songs.

No amps, no cabs, no hassle. Just you, your song and a great mix. By yourself – and Andy Sneap.

The EZmix pack is available to purchase for $49 USD.