Toontrack has announced Dirt, a new expansion pack for the EZmix effect processor for Windows and Mac. 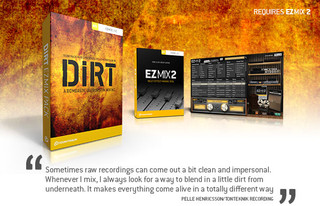 Get in on some of the secrets from the man who helped define the shape of punk to come: Pelle Henricsson.

With 30+ years honing his craft behind the mixing console and world-renowned for his work with legendary heavy-weights like Refused (“The Shape of Punk to Come”), Meshuggah (“None”), Poison the Well and Hell Is For Heroes, this widely acclaimed and multifaceted producer/mixing engineer knows exactly what obstacles one might bump into in any given mixing situation. “Sometimes raw recordings can come out a bit clean and impersonal. Whenever I mix, I always look for a way to blend in a little dirt from underneath. It makes everything come alive in a totally different way”, he says.

The Dirt EZmix Pack does exactly that – and then some. Complete with amp/cab simulation settings for guitars and bass, vocals, instrument busses and much more, this pack is perfect for any pop, rock, metal or hardcore track in need of a fuel injection.

The Dirt EZmix Pack is available to purchase for 39 EUR.