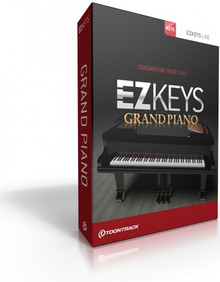 Toontrack has released EZkeys Grand Piano, a plugin and stand alone instrument that combines a world-class piano player, songwriting partner, arranger and a meticulously sampled grand piano – all in one package.

Complete with an extensive drag and drop MIDI library, a groundbreaking smart transpose functionality that allows the user to change chords and add harmonic color on the fly as well as introducing an intuitive interface with a streamlined workflow, EZkeys is not just an amazingly sounding instrument, it’s a songwriting palette that sets a new benchmark in creative music software.

EZkeys Grand Piano for Windows and Mac (VST/AU/RTAS/Standalone) is avaialble to purchase for $179 USD / 139 EUR.