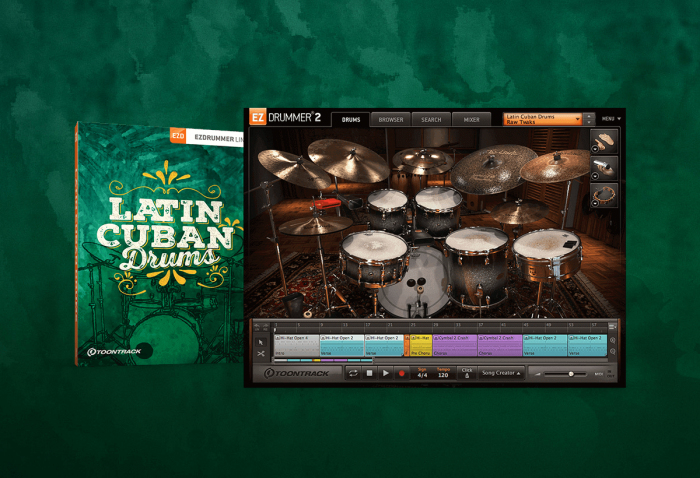 While rhythm may be the heartbeat of most genres, in Latin music the pulse and the beat is the very lifeblood. In fact, in many ways the groove is the song. Welcome to the Latin Cuban Drums EZX, a mix-ready battery of kits tailored for just that – infectious latin-flavored rhythms for anything from traditional to modern.

The Latin Cuban Drums EZX features a handpicked collection of drums and a selection of mounted percussion pieces such as bells, woodblocks and a timbale. It was all captured at the famed Sear Sound Studios in New York by a team with a much-prominent status in the broad field of Latin music: Grammy Award-winning and Emmy-nominated engineer Dave Kowalski and drummer Robby Ameen. Between them, their work spans from the early ’80s through to today and includes collaborations with numerous top artists, awards and accolades. In fact, Robby is arguably one of the most influential Latin-oriented drummers of the past few decades with books, instructional videos and much more on his CV – all on the subject of drums in Latin music.

Welcome to two custom kits tailored for Latin and Cuban music, recorded in the aura of a classic New York room by one of the most well-versed drummers in the field – all at your fingertips.

A second title in this series, the Latin Cuban Percussion EZX, is slated for release on June 16th, 2020.