Toontrack has announced the release of the Legacy of Rock SDX, a sound library expansion for Superior Drummer 3 recorded by legendary engineer/producer Eddie Kramer. 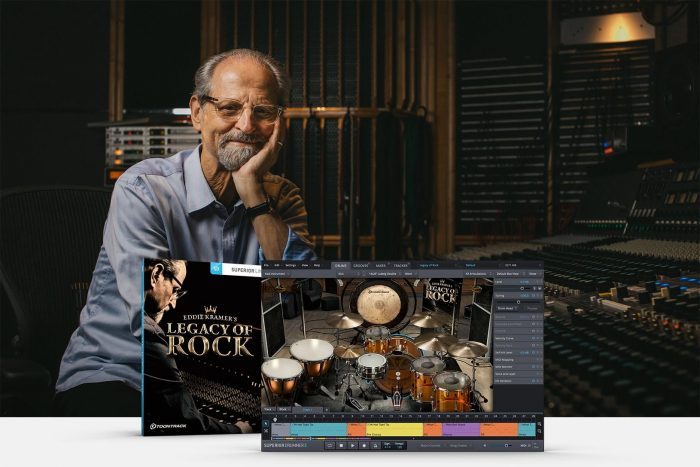 Not many can say that they were there when it happened. Eddie Kramer has been right smack center of it as it happened, making it happen and shaping its very essence with his bare hands for five decades and counting. We’re talking about rock – the sound of rock and the deafening impact the craft of engineering, producing and mixing it right has on how it ends up echoing through history.

Meet audio visionary Eddie Kramer, the uncrowned king who shaped the sound of the legends that became immortal icons of rock and who in the process became a royalty of rock himself. This is his collection of drums and a true homage to classic rock as we know it.

The Legacy of Rock SDX zones in on Eddie’s formative years in the buzzing sixties London scene and continues on through the seventies. It includes five drum kits, each sourced and tailored to mirror a significant era or sound in Kramer’s remarkable career. All drums were recorded in Kramer’s studio of choice, Studio 1 at AIR in London, and captured through signal chains of vintage microphones as well as handpicked, rare and custom equipment scouted specifically for these sessions.

These drums rock. Take it from the man who only in the first two decades of his career managed to work with The Rolling Stones and The Beatles, record the entire Jimi Hendrix catalog, capture several of Led Zeppelin’s most pioneering albums and man the board as the original Woodstock festival was caught on tape. Welcome to a bona fide treasure chest of drum sounds – ready for you to hone, mold and shape to make your own dent in rock history with.

The SDX is available from Toontrack for 159 EUR/$179 USD and from distributors Time+Space and PluginFox, priced 149 EUR/$149 USD.