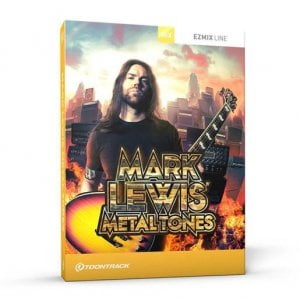 Toontrack has announced the release of the Mark Lewis’ Metal Tones EZmix Pack, a guitar and bass-oriented EZmix 2 expansion by Mark Lewis. This marks the third release so far in November for Toontrack’s ongoing Metal Month.

Having shaped the sound of acts like Whitechapel, DevilDriver, Trivium and Coal Chamber, Mark Lewis has risen to become one of the top names in modern metal production. One of his signature traits, always a given in any production bearing the Lewis sonic seal, is the wall of guitars – deafening, yet defined, balanced and distinguishable.

In this collection of settings for EZmix 2, he revisited some of his classic productions to detract the essence of what made the guitars live and breathe. In addition, he created all-new tones from scratch. Expect anything from subtle finesse to raw, unadulterated power – tones capturing the entire range of the extremes.