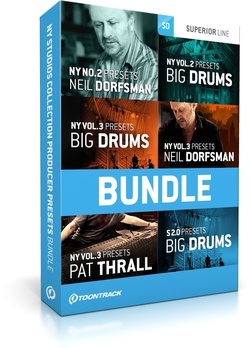 The three Big Drums titles were crafted by Toontrack’s own head of sound design, Mattias Eklund, and designed to showcase the amazing acoustics of the main recording rooms at the renowned Avatar Studios, Allaire Studios and The Hit Factory. Get ten incredibly creative takes on how to mix ambient drums, using a number of varying tools, channel selections and the built-in effects in Superior Drummer 2, tweaked to the very outer limits.

The preset collections by Neil Dorfsman and Pat Thrall take you back directly inside the creative minds of the very men who helmed the consoles when the original sessions took place. Get fresh, new ideas on how to squeeze, tweak, shape and mold the raw material of these pristine recordings into all-new, layered, hybrid kits. From ambient to dry, punchy and edgy.

Use these settings as a starting point to hone your own tones, or just call up a preset and sit back. Get the most out of your SDX libraries – put the powerful framework of Superior Drummer 2 to work.

The bundle is available for purchase for 29 EUR.