Tracktion Software Corporation has announced the release of Tracktion 4, the latest version of the digital audio workstation (DAW) platform the company purchased from LOUD Technologies in 2012. 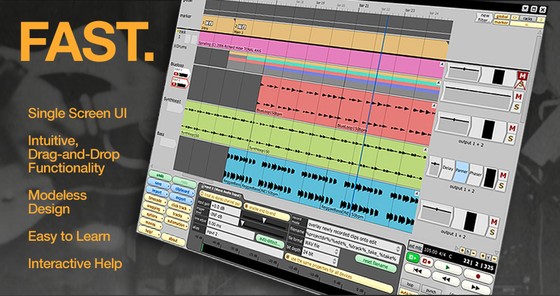 Originally created by developer Julian Storer, Tracktion debuted in 2002 to instant acclaim. It was acquired by Mackie Designs, later LOUD Technologies, in 2003 and updated twice prior to 2009. A lack of further updates or communication regarding Tracktion led many in the platform’s large and vocal user base to assume it had been discontinued. However, Storer teamed up with ex-Mackie employees (Mackoids) James ‘Woody’ Woodburn and Dave Christenson to form TSC with the specific goal of reviving and advancing the unique Tracktion brand.

Tracktion 4 (T4) features the same operational characteristics as the original program but with an entirely new audio engine. This progression is intended not only to make T4 compatible with all the latest operating systems, plug-in and controller technology, but also to create a modern platform for further development. TSC is dedicated to the continued evolution of the product.

Windows Audio Session API (WASAPI) is included for optimized audio data management between applications. There is also support for 64bit Mac and PC operating systems so Tracktion can squeeze the highest performance out of current computer resources.

Trackion 4 is available to purchase for $59.95 USD for new customers and $29.95 USD for upgrades. As of January 24th, customers purchasing a new Mackie product that includes Tracktion can download Tracktion 4 immediately.