Twisted Tools has announced the release of S-LAYER, a sound creation tool for Native Instruments Reaktor 5. 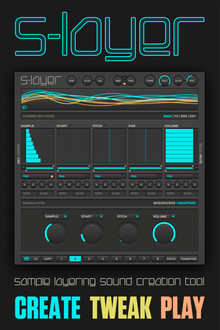 S-LAYER is a sound creation tool that allows you to create, edit and play new sound combinations by taking samples and layering them together using an eight part sampler and an intuitive cell layout. By combining sounds from the included sample map or your existing sample library, S-LAYER facilitates the discovery of new oneshots, sound effects and loops using pre-existing sample content. Whether you’re looking for a new way to create thick drum samples for hip-hop or a massive impact sound effect for game, S-LAYER delivers.

With S-LAYER, up to eight parts are played back and manipulated simultaneously using an advanced layered sampler engine, where each layer remains independent and can be surgically edited. Time-tested sound design techniques such as reversing, pitching, modulating and mixing sounds together can be quickly achieved by randomizing and fine-tuning with sliders and knobs. In addition to the on-board granular, filter and time-based effects, you can also connect your own effects using the insert/send system or by using the direct outputs. Once you’ve found a sound combination that you like, you can store it on-the-fly in one of eight ‘Scenes’ which can be dynamically played backed and controlled using MIDI.

In addition to the included sample library featuring sounds from many renowned sound designers, S-LAYER comes bundled with an iPad Lemur MIDI template by Antonio Blanca and a MIDI template for Native Instruments’ Maschine.

S-LAYER for Reaktor 5 is availble to purchase for $69 USD.