u-he has announced the release of the Uhbik D Rack Extension delay effect for Propellerhead Reason. 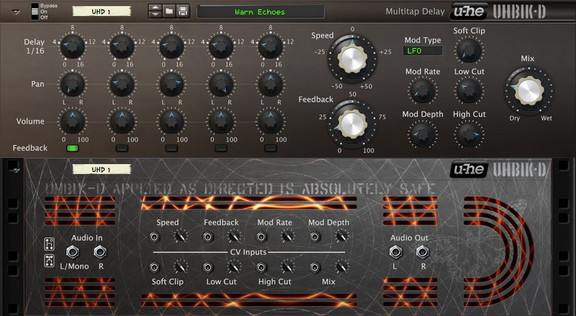 Uhbik-D is a multi-tap delay resembling a classic tape echo unit, with multiple record and playback heads. The delay time is a function of tape speed: the slower the tape, the longer the delay. Like classic echo units, Uhbik-D also feature a regeneration control (feedback) – how much of the output is mixed back into the input.

Real tape echo has several technical imperfections and limitations. Magnetic tape already has a limited frequency and dynamic range, tape wears out over time, transport mechanisms become erratic. But what were previously considered serious drawbacks in need of improvement, such irregularities (coloration, flutter) have become quite popular in this age of digital perfection!

On the other hand, digital delays do have some significant advantages. For instance precise and repeatable timing and freely adjustable taps (the digital equivalent of playback heads).

Uhbik-D combines all these concepts, adds synchronization and more. As there are no physical playback heads, delay times can be extremely short – and tap positions can even cross over!

The Uhbik D Rack Extension is available to purchase for the introductory price of $19 USD until January 2nd, 2013 (regular price $39 USD).