u-he has announced the release of version 1.2 of Hive, the virtual synthesizer instrument that is designed to by sleek, streamlined and fast. 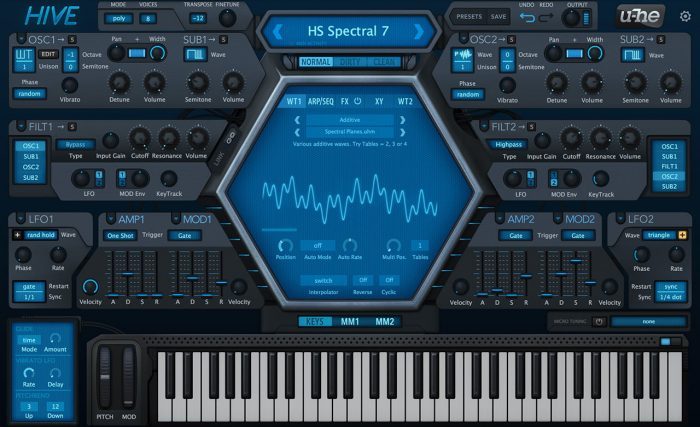 With the release of version 1.2, Hive features Wavetable scanning support. Wavetables can be easily selectable as oscillator waveforms and controlled in the Hive hexagon. It’s also possible to manually scan through wavetables, or to automate the scanning via the modulation matrix. Through the wavetable controls, you can enable the scanning in Auto mode with different looping options. This lets you animate the position without the need of a modulation source.

More features include a Reverse option to flip the wavetable back to front, Cyclic mode for seamless wavetable cycling, and different real-time interpolation methods.

The Hive factory presets library has been expanded with 489 presets showcasing the new technology. You can find them in the new preset browser under the *wavetable* tag.

Hive is available for Windows, Mac and Linux in VST, AU and AAX plugin formats, priced at 149 EUR. The update is free for all owners of Hive 1.x.