Ueberschall has announced the release of Dubstep Destruction, a new sound library for the Elastik Player instrument. 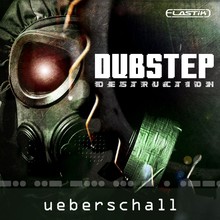 DUBSTEP Destruction displays the genre‘s aggressive aspects. Here, punchy beats, booming wobble-basses, synth-lines and sound effects are even harder than dubstep‘s predominant raw standards. To keep the tracks flowing and danceable, we added relaxed synth-lines in ragga-style and MC-vocals to the library which channel the distorted sound elements just in the right way. DUBSTEP Destruction proves that a hard style can be successfully combined with other genres. And by mixing these massive sounding construction kits with elements of other genres, the possibilities are almost limitless.

This 950 MB library consists of ten construction kits with a total amount of 721 loops. Each kit contains five subfolders with a main kit that unites all loops and sounds of the main theme. In addition, there are variations of the main kit. In fact, a couple of variations are so different; you may use them to start a brand new track.

Like in other Ueberschall products, the drums are available as a complete sub mix and as single tracks for kick, snare, hi-hat, claps, cymbals and synthesized percussions. The latter allow building individual mixes and being able to select and exchange sounds across multiple kits. This system even allows easy combination of drum elements across different Elastik-libraries. The instrument tracks contain ground-shaking sub-basses, booming wobble-basslines, weird synthesizers, ragga-vocals, atmospheric chords and pads as well as eccentric sound effects. As a bonus, DUBSTEP Destruction also offers 37 basslines, 80 lead-sounds and 69 sound effects.

Every ambitious producer or dubstep-DJ should have this library installed. DUBSTEP Destruction is a perfect match for music production and also ideally suited for jingles, game-, television- and film scoring where harder sound is demanded.

The sound library is available to purchase for 49 EUR.