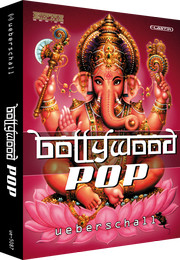 This library is a true reflection of the music that accumulates today’s contemporary Bollywood sound tracks. The library is engineered with factual high-end technical standards, which accomplishes all quality demands for high fidelity productions of the western music.

The bollywood movies are globally identified as the worlds leading drama and romance based scenario scripts, which are traditionally accompanied by spectacular sound tracks that lift up the viewers experience to a higher level. The inimitable soprano lines of the adorable Hindi female vocal artists, singing duet love lines with romantic sounding male vocalists. The high pitched string lines, the rare instruments that are never heard anywhere near your neighbourhood, gliding up and down in eight/note scales crying out romance and obsession, percussion works that inevitably inspires and impacts the worlds pop-music.

Bollywood Pop is available to purchase for €99 EUR.