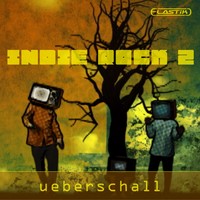 Two guitars, a bass and drums – get your ideas moving and start jamming. Full throttle! The best song ideas often derive from the raw sound and easy atmosphere in a rehearsal space. With Indie Rock 2, you can take these ideas straight into your DAW.

Finally, the second part of our successful library Indie Rock is here! And we have even topped it. This library sounds a lot rougher and meatier than volume 1. An unpolished and lively sound you only know from these cellar-rehearsal-places. Fresh and careless, this library moves between genres. Punk, Rock and Pop meet with spirit and creativity – real Indie!

Indie Rock 2 consists of 10 construction kits, including a total of 1.215 loops. Each construction kit is divided into five to eight parts. Available are intro, A-, B- and C-parts as well as breaks and outro, up to 16 bars in length. This large choice allows building „real“ song structures, avoiding the artificial looped character when using too little variations of a theme. Not with the varied parts of these construction kits! However, you may always pick certain kit elements and create looped-aesthetics intended – typical for remixes and crossover-tracks.

The electric guitars and basses of Indie Rock 2 have been recorded using real amplifiers – no modeling technology. All guitar riffs are available as amped sound as well as dry D.I.-recordings. You chose between a professionally mic‘ed sound, ready-to-use, or the direct instrument version, ready to be sculpted with your favored tools.

As in most Ueberschall productions, the drums have been carefully and elaborated mic‘ed, recorded and prepared. At first, there is a premixed drum-mix for immediate use. In addition, you also find the individual tracks of the complete drum kit: bass drum, snare (mic‘ed from top and bottom), hi-hats, crash cymbals, toms, overhead- and room-microphones. Using these tracks, you can freely shape the sound of the drum kit to your taste.

This library delivers lots of inspiration for music productions of classic rock, powerful pop up to cross-genre tracks. Similarly, the construction kits are suited for target oriented, trendy jingles, television trailers, advertisements as well as for scoring movies and games. In all cases, the Elastik player supports a fast workflow and creative use of the sample content.