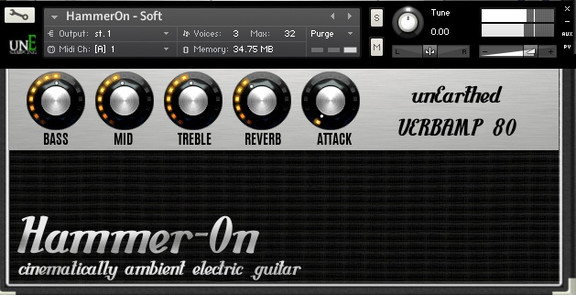 The Hammer-On technique is usually utilized to bridge notes together… or for killer solos. For this library it is the sole articulation used and played on a Stratocaster which has been cleanly recorded and multisampled. There are no loops here (save for one patch), each patch contains meticulously recorded and mastered multisamples as played on a Strat. As this sort of play style is normally not showcased, it gives this instrument a very unique sound and timbre not found anywhere else.

Consisting of 13 patches, Hammer-On can sound soft and sweet, creepy, or up tension in an action scene. If you play in the higher ranges it can even sound ethnic, similar to a dulcimer. The GUI (or “unearthed verbamp 80”) has controls for EQ (bass, mid, hi), reverb (a huge hall convolution reverb), and attack. The attack and EQ knobs can drastically alter the sound and vibe of each patch.

Hammer-On is not your average guitar library. It does contain multisampled electric guitar patches, but it is aimed more squarely at cinematic and video game scores than producing authentic rock ballads.

Leap Into The Void releases The Abyss for Absynth