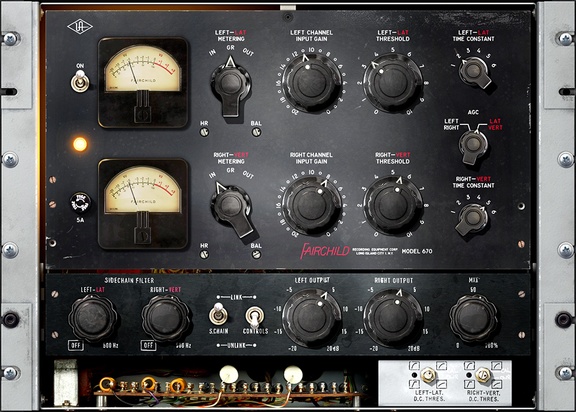 For a half-century, the Fairchild 670 and 660 tube limiters have defined many of popular music’s most revered vocal and drum sounds, from Pink Floyd and the Beatles to classic Motown singles. Now, Universal Audio has fully captured Fairchild’s revered tube character with the Fairchild Tube Limiter Plug-In Collection for the UAD Powered Plug-Ins platform and Apollo Audio Interfaces.

In 2004, Universal Audio released the Fairchild 670 Legacy plug-in, which was quickly heralded as the best Fairchild 670 emulation available. Today, UA’s team of DSP experts have improved the original time constants and gain reduction curves while modeling — for the first time ever — the complete tube-powered amplifier and transformer sections of their hardware counterparts. Far beyond other Fairchild emulations, only the new UAD Fairchild Limiter Collection is based on an accurate circuit model of Ocean Way’s “golden-reference” units.
The Fairchild Tube Limiter Collection also offers “digital only” features such as sidechain filtering, dry/wet parallel blend, and headroom controls, giving owners of Apollo audio interfaces and UAD-2 DSP Accelerator hardware modern workflow appointments.

The Fairchild Tube Limiter Collection is available to purchase for $299 USD.

Mellowmuse plugins on sale at up to 50% OFF (compressor, EQ, saturator & more)

BeatSkillz Slam Dawg, Slam XL and Bounce on sale for $9 USD each!

Download a free collection of Serum synth presets from Loopmasters!

How to design fierce creature vocals sound design tutorial, get 26...