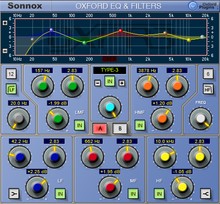 Universal Audio has announced the release of the Sonnox Oxford EQ plug-in for the UAD-2 Powered Plug-Ins platform.

The Oxford EQ is available for $299 USD, available as part of the new UAD Software v6.3 release.