Vienna Symphonic Library has announced the release of Vienna Ensemble PRO, a mixing host with MIDI and audio LAN capability. 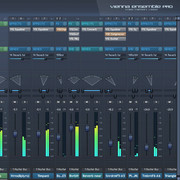 Vienna Ensemble PRO works universally on Macs and PCs, hosting Vienna Instruments as well as 3rd party VSTi (PC), AU (Mac) instruments and effect plug-ins. With the 64-bit version of Vienna Ensemble PRO you can load as many samples into your RAM as you have available! Use it as a host on the same computer as your sequencer to integrate all your 64-bit and 32-bit instruments, or use it as a master-slave solution, even on cross-platform networks with multiple Macs and PCs. Run your sequencer on your main computer, launch Vienna Ensemble PRO on the slave computer, and simply connect them using an Ethernet cable. You can easily route the audio streams of a whole arsenal of computers back to your main machine.

Another major improvement is the new Preserve function. Now you can keep your templates and instruments loaded while switching from one project to another. Add to that many other new features and improvements, such as the sleek new user interface, the Optimize All function, full 64-bit support on the Mac, mixer automation, and you’re presented with the uber-host for sample-based music production on one or more computers!