Drumdrops has announced the release of its Vintage Disco Kit sample library. 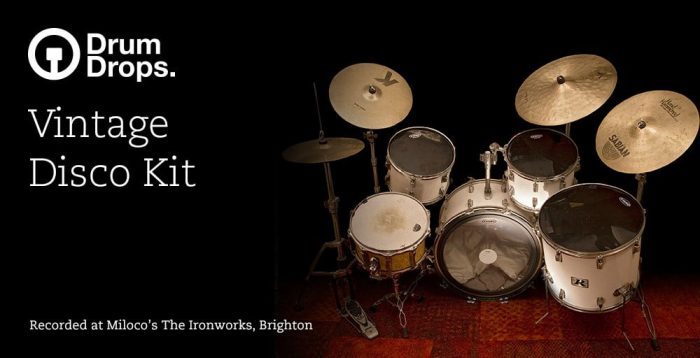 Here at Drumdrops we love the original Disco era, influenced by many and sampled 1000’s of times. So what is it about the Disco sound that makes it so enticing ? For us at Drumdrops it would have to mean a fat low end from the kick but with a little hi end bite to cut through the four to the floor groove, a warm and rich snare to keep that beat focused that of course tonally mixes with a clap sample. Sweet yet fast sounding 15 inch hi hats for a classy open hi hat sound. All Toms low and dead ready for the supersonic fills and breakdowns neccesary to hype the dance floor into a frenzy.

Remo ebony ambassador and evans hydraulic heads for the ultiimate disco sound. Gaffer taped, damped with dustcloths, tuned low and dead, the disco sound is finally back. Recorded with a late 70s sound in mind in a nice tight recording room.

Bonus cowbells, cabassa and tambourine and electronic analogue clap trap are included for your breakdown pleasure. (in all packs except the Drum Replacement Pack).

The Vintage Disco kit is now available in four formats: The All Samples Pack, The Multi-Sample Pack, The Drum Replacement Pack and the One Shot Sample Pack. A Kontakt Pack and BFD pack will be following soon.

For a limited period you can save 20% off a purchase of any pack using coupon code vintagedisco20 at checkout.