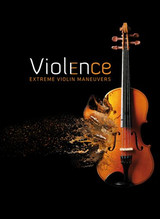 Created for both musical use and sound design, Violence features an unprecedented deconstruction of a solo violin recorded from numerous angles: bowed, scraped, hit, plucked, played with mallets, chopsticks, guitar picks, and wet fingers. Then the sound design was repitched, layered, and post-processed through an array of unusual tools to produce sounds unlike any found in other virtual instruments. More than eighty unique patches were designed, each with a custom set of scripted knobs and controls all conveniently organized into four categories of sounds: Drum Kits, Melodic, Pads and Sound Effects, and Tempo-Synced.