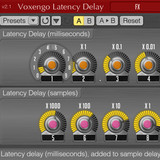 Voxengo has released version 2.1 of Latency Delay, an auxiliary plug-in which allows you to compensate latency produced by any audio plug-ins, instruments and processes which produce latency but do not try to report it to the host.

Latency Delay introduces 10000 samples latency itself and delays the audio signal by 10000 minus the specified amount of samples or milliseconds. Please note that host audio application should support the latency compensation itself for this plug-in to function properly.

Latency Delay is available to download as a freeware plug-in for Windows and Mac (VST/AU).