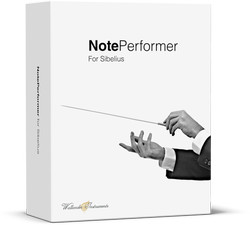 Wallander Instruments has announced the release of NotePerformer for Sibelius, an orchestral sound library that turns written score into an expressive musical performance, without user intervention.

NotePerformer replaces the built-in sounds in the world’s best selling music notation software, Avid’s Sibelius, with its own playback engine and sounds.

NotePerformer introduces a dramatic improvement on existing MIDI playback technologies, by reading ahead in the score during playback, analyzing the music, and rendering the music as an expressive musical performance instead of processing it note-by-note. This allows an accurate reproduction of the written music, with realistic musical phrasing for every single member of your virtual orchestra.

Composers, orchestrators, musicians and students of music can now enjoy the benefits of highly realistic orchestral playback in their notation program. NotePerformer playback is even accurate enough for producing a high-quality orchestral mock-up of a score, directly from notation program playback.

NotePerformer is available to purchase for $129 USD.

25% off all Ableton software – only until September 5th