Wave Alchemy has announced the release of the Pro II Synthesizer, a sample library for Native Instruments Kontakt, Reason, and Ableton Live. 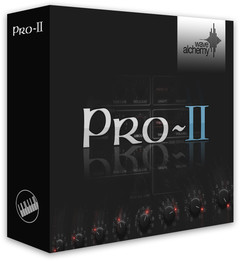 After many months of creative sound design and intensive script programming we are extremely proud to announce the release of the Pro II analogue hybrid synthesizer for Kontakt 4. Inspired by one of the most popular synth’s of its time, Pro II combines classic sounds with modern sound shaping tools to achieve a versatile and fully programmable virtual synthesizer.

Pro II ships with a 3.9GB core sound library and includes 195 expertly programmed presets, all of which are editable via our extensively scripted instrument panel and stunning GUI controls.

Pro II for Kontakt is available to purchase for £39.95 GBP.

For non Kontakt users a slightly scaled down version of the Pro II is available as a Reason 4 Refill (£24.95 GBP). Ableton users can expect a Live Pack version early December 2011 (£27.95).