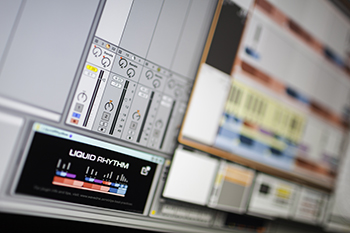 WaveDNA has announced version 1.4.2 of Liquid Rhythm, introducing a number of improvements and fixes to the beat creation software for Windows and Mac.

Most notably, Liquid Rhythm is now fully supported on OS X Yosemite, and features a snazzy new single-click installer. With these improvements, WaveDNA brings you the most intuitive, imaginative, and effortless workflow possible, further establishing Liquid Rhythm as the premier beat creation software.

Additionally, WaveDNA showcased Liquid Rhythm alongside a flying drum machine, pushing the boundaries of both beat production and gravity. In a video posted to YouTube, the mad scientists at WaveDNA demonstrated a touch-sensitive flying quadcopter powered by the Linux driven robot operating system (ROS). The quadcopter wirelessly translated and transmitted MIDI information to a computer running Liquid Rhythm, Ableton Live Suite, and Max for Live—thereby sculpting a beat with attitude and altitude.

Liquid Rhythm is available for purchase for $129 USD.