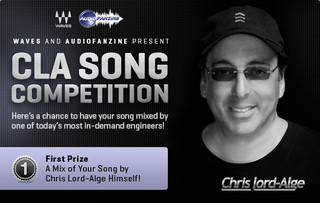 Waves has announced the CLA Song Competition in collaboration with Audiofanzine.

Chris will make his choice based on the overall presentation: song, image, and performance.

The Top 25 finalists will be chosen by public voting; one lucky (and talented) winner will have their song mixed by none other than CLA himself.

Entries will be accepted from March 14 to April 3, and public voting will take place from April 4 to April 10. The winner will be announced shortly thereafter. All entrants will receive a complimentary $100 USD voucher that may be used toward any Waves product or upgrade.*

*Toward 50% off any bundle(s) / 25% off any single plugin(s). Vouchers will be sent once the competition ends.

The Loop Loft releases Everything But Sticks – Reason ReFill