Plugin Boutique has launched a sale on the SSL 4000 Collection, a plugin bundle from Waves Audio that delivers the legendary SSL console sound, with easy-to-use presets from top mixers. 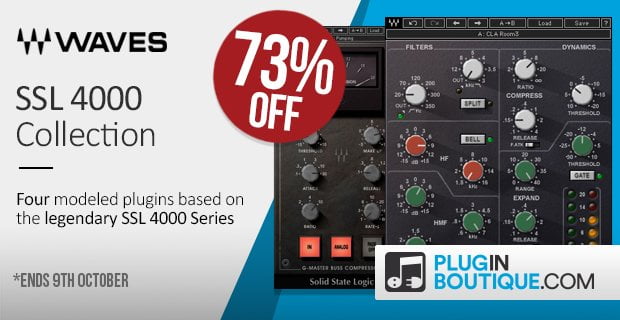 Developed under license from Solid State Logic, the bundle includes 4 plugins modeled on the legendary SSL 4000 mixing consoles, including the EQ and dynamics sections of the SSL 4000 E and G series consoles.

The collection comes with from Grammy-winning producers and engineers: Chris Lord-Alge, Dave Pensado, Steve Lillywhite and many more.

Developed under license from Solid State Logic, The SSL 4000 Collection includes four meticulously modeled plugins based on the legendary SSL 4000 Series: the SSL E-Channel, the SSL G-Master Buss Compressor, the SSL G-Equalizer and the all-new G-Channel.

These plugins sound so close to the original consoles, even experts who work with SSL boards day in and day out can’t tell the difference.