Waves Audio has announced that its X-WSG I/O Card and the Impact Combo for X32 and M32 Consoles are now available for preoder, offering the most affordable way to run SoundGrid-compatible plugins by Waves and other companies (compressors, EQs, limiters, reverbs, delays, feedback elimination tools and more) on your X32 or M32 mixer. 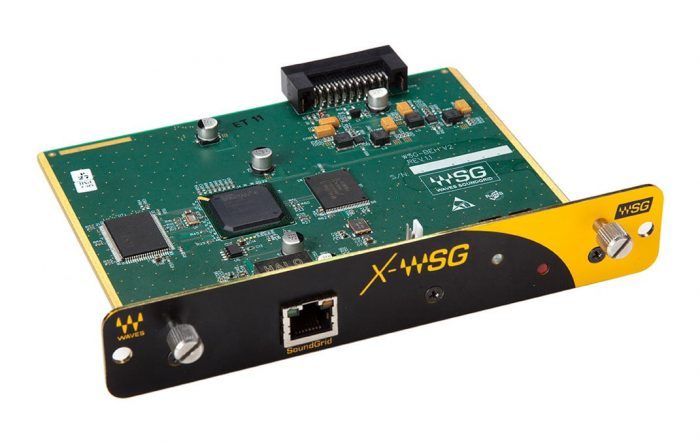 With the X-WSG I/O card and a SoundGrid DSP server, you can mix with award-winning, state-of-the-art SoundGrid audio plugins by Waves and with SoundGrid-compatible plugins by other companies, allowing you to dramatically improve your live sound. You can also soundcheck and capture multi-track recordings with plugins – all in extremely low latency.

The Waves X-WSG card enables you to connect your digital console to any Waves SoundGrid audio processing server via a single Ethernet cable. It also features clock Sync-over-Ethernet for syncing multiple mixers and performing digital splits. Together with a SoundGrid server and a Mac or PC, the Waves X-WSG I/O card gives you more control over your live sound – directly from your X32 or M32 console.

You can also get the X-WSG card as part of the Waves Impact Combo for X32 and M32 Consoles.

This combo is the complete, affordable system for mixing live with SoundGrid-compatible plugins on your X32 or M32 mixer. It includes an SoundGrid Impact Server for processing your plugins, the X-WSG I/O card, six Waves plugins for live mixing and the Waves MultiRack plugin host application, as well as Ethernet cables and a network switch for connecting all of the combo’s hardware components.

You can now take your live sound to the next level by easily connecting your X32 or M32 mixer to the power of SoundGrid plugin processing via Ethernet. Run the included EQ, compression, delay, reverb and bass enhancement plugins on your mixer – and if you want to add more plugins, you can also choose from hundreds of SoundGrid-compatible plugins by Waves and other companies.

The X-WSG I/O card and the Impact Combo for X32 and M32 Consoles are now available for pre-order. Both are shipping in June 2017.