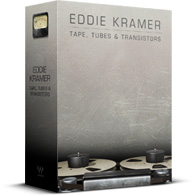 Together, they recreate Eddie’s golden audio chain, which he used to record musical icons like Jimi Hendrix, Led Zeppelin, and The Beatles. Now, the legendary sound of London’s Olympic Studios can be yours—with Tape, Tubes & Transistors.

The Tape, Tubes & Transistors bundle is available to purchase for the introductory price of $199 USD (Native) / $299 USD (TDM). The effect plug-ins are also sold separately.