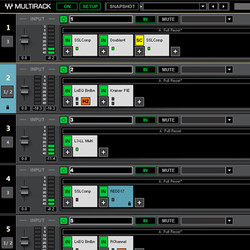 Waves has announced the release of Waves MultiRack 9.5, the latest version of the live sound plugin host.

MultiRack 9.5 includes a variety of new features that are sure to make your life a whole lot easier. Like an improved streamlined graphic interface for smoother performance. The capability to record to two computers simultaneously. And best of all, the ability to run Waves Signature Series plugins, from Chris Lord-Alge, Tony Maserati, Jack Joseph Puig, Eddie Kramer and Manny Marroquin*, on any MultiRack Native or SoundGrid system. Get ready to take the stage – with MultiRack 9.5!