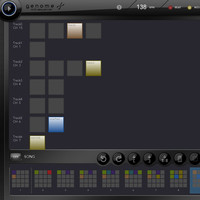 Musicians can start tearing it up in the studio with Genome MIDI Sequencer (GMS), the first true pattern based MIDI sequencer for the iPad. With GMS you can control all of your MIDI gear – sequence single patterns or an entire 16 track song.

GMS easily syncs drum machines and arpeggiators by sending and receiving MIDI clock messages. General MIDI files are easily exported and imported for integration with desktop apps. The app is compatible with the Line6 MIDI Mobilizer and any interfaces that support CoreMIDI using the Camera Connection Kit or Network MIDI, which allows users to send events to Mac Desktops or other iOS devices and apps.

Developer Dave Wallin, owner of White Noise Audio Software, started working on GMS when he saw the first hardware manufacturers making interfaces for the iPhone and iPad. “There weren’t any apps that did full sequencing. GMS fills that gap by providing artists with the option of a portable sequencer with the flexibility and interface of a desk top sequencer. It’s great for musicians who are looking to try an alternative studio set up or for those who just want something more compact,” said Wallin.

The Genome MIDI Sequencer is available to purchase for $12.99 USD.

Note that some MIDI gear or software synths are required to use this app as GMS does not produce any sounds by itself.