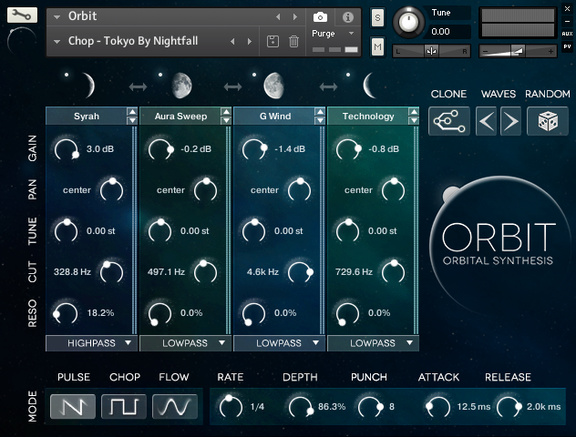 “Modern music often relies on sophisticated textures, ambiance and pulsing rhythms,” says Jeff Rona, film, TV and video game composer who conceived of the new instrument. “Until now it has been very difficult and time-consuming to produce this kind of deep, abstract sound yourself. With ORBIT we have created a deceptively simple but powerful musical tool that opens up a fresh new world of modern sound and rhythm. I certainly wish I had a tool like this when I’ve been under a heavy deadline!”

Twenty years of contemporary film scoring experience went into creating ORBIT’s sounds that work in most any musical setting: from light and pretty, to dark, foreboding and mysterious. These are the types of sound Rona has used in his own scores, as well as ones he’s done in collaboration with other great artists such as Hans Zimmer, Cliff Martinez, Mark Isham, John Powell, Philip Glass, Harry Gregson-Williams, and many others. The sounds used in ORBIT come from acoustic and electric instruments as well as a massive bank of analog and digital synths with custom designed processing.

Orbit for Kontakt will be available on March 25th, 2015, for the introductory price of $150 USD through April 15th, 2015 (regular $200 USD). Further discounts are available for students, and anyone who Likes or Shares the Wide Blue Sound Facebook page.