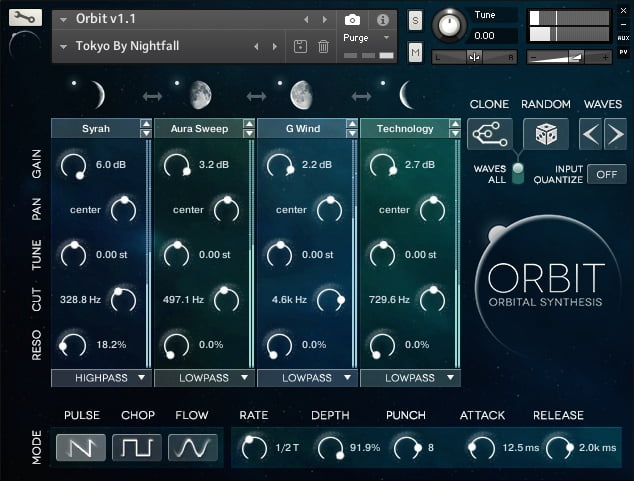 ORBIT is being lauded by producers and composers worldwide for its bold, no-nonsense approach to musical synth design. ORBIT’s acclaimed interface brings to your fingertips a universe of cinematic, production-ready sound in the form of pulses and distinctive musical pads & atmospheres. Its revolutionary sound-morphing engine creates sounds that infinitely evolve, while retaining the musicality that drives modern cinematic music. ORBIT’s sounds range from light and shimmering to dark, mysterious and edgy. Don’t miss the synth that Harry Gregson-Williams (The Chronicles of Narnia, Kingdom of Heaven, Shrek) calls “distinctive and inspirational” and Jack Wall (Mass Effect, Call of Duty) proclaims as “gorgeous and meaningful”.

In this release, ORBIT becomes a Kontakt Player library, gains compatibility with external remotes, and boasts significant new features and workflow enhancements – enabling users to create new, unique sounds faster than ever before.

Orbit is available for purchase for $150 USD for a limited time with discount code DEFY_GRAVITY at checkout (MSRP $200 USD). Further discounts are available for students and educators with a valid Student ID.