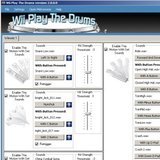 Evan Merz wrote in to let us know about some updates on Wii Play The Drums, a .NET application written in visual basic that gives the user the experience of playing drums using the Nintendo Wii Wiimotes.

Wii Play The Drums allows users to map any .wav sound to any of the provided Wiimote gesture/button combinations provided, create their own presets, record their sessions and play them back.

After a long incubation, the instrument that launched this blog is finally taking the next step.

The project has been moved to CodePlex, to allow more collaborative development, and to get more developers involved with the code. If you want to download the latest version of Wii Play the Drums, or check out the source code, then you will have to head over to the Wii Play the Drums site on CodePlex.

Evan has found a partner in Andre Knight, who will also moderate the development process on the CodePlex site.

Evan wants to encourage you to get involved:

If you have wanted to contribute code to this project, or just tell us how you think it should work, hit the Wii Play the Drums site on CodePlex, and leave us a message in the forums.