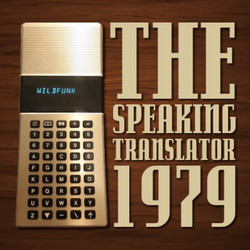 Wildfunk has launched The Speaking Translator, a sample pack featuring a collection of synthesized speech samples.

In 1979 Texas Instruments released its “Language Translator”, a silver device that looks like a calculator but translates words and outputs them on a built-in speaker.

The speech output has its own unique character: Harsh and digital. Even Kraftwerk could not resist and used this little gadget on “Numbers” and “Computer World” (both released in 1981).

Now 35 years later all vocals from this rare vintage device are available for your sampler: 530 samples sorted into Beeps, Letters, Numbers, Phrases and Words.

The sample pack is available for purchase for 19 EUR.