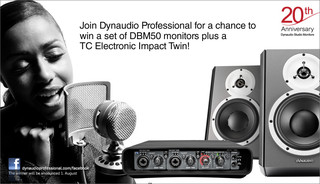 TC Electronic has announced that Dynaudio Professional is offering a chance to win an Impact Twin interface and a set of DBM50 monitor speakers.

Our friends at Dynaudio Professional have launched a competition where you can win a pair of their brand new DBM50 desktop monitors as well as one of our Impact Twin Audio Interfaces – virtually a ‘Bimbo Jones’ studio setup.

The winner will be announced on Dynaudio Professional’s Facebook page 1 August, 2012.