WMD has announced it has released the Performance Mixer, a Eurorack module featuring a mixer for live performance. 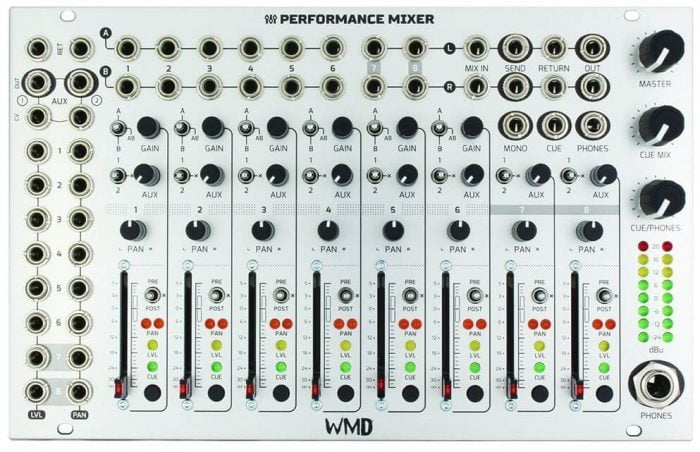 The Performance Mixer is an 8 channel audio mixer designed specifically for live performance and jam sessions within the modular ecosystem. With 12 audio inputs for the first 6 channels, and 2 true stereo channels, there is plenty of room for all of your modular signals and more.

2 mono auxiliary sends with dual mono returns, stereo send and return, and another set of stereo mix inputs give you the routing you need to send signals to interesting effects as well as utility uses such as bus compression and master equalizers.

Tired of not being able to tune oscillators and program sequencers on the fly? Not to worry, the performance mixer also includes a cue mix section so you can monitor your incoming signals in headphones before sending them to the front of house mix. Just like on a traditional DJ mixer, the cue mix knob determines how much of the cue vs the FOH mix you hear in the phones.

Two headphone outputs for convenience and teamwork. Collaborate with friends with out wasting any channels by sending the stereo output of their mixer into the unity gain mix input. Monitor with the dual headphone outputs and you can both hear the entire mix.

The WMD Performance Mixer is available from dealers, priced at $749 USD.