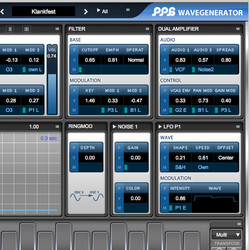 Wolfgang Palm has announced the release of PPG WaveGenerator for Mac OS X and Windows, a synthesizer instrument that was first released for iOS.

Now the same great synth takes advantage of the additional power found on desktop and laptop computers to allow users to use this as a in their favourite Mac and PC DAW as a 64 or 32 bit VSTi. AU is to planned to follow shortly.

The PPG WaveGenerator comes with a multitude of wavetables. The sound material contains the typical sounds from the original PPG wave models, as well as many new sounds generated by versatile analysis tools and also hand edited waves. This plugin enables the user, to create his own wavetables in a playful way, and to hear the result immediately. Also you can construct the waves by adding harmonics very precise.

The plug-in is available for Windows and Mac (VST) for 99 EUR. AU support is coming soon.