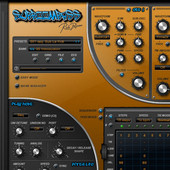 Xenos Soundworks has announced the release of Dub N Breaks, a new soundset for SubBoomBass by Rob Papen.

Modwheel, Aftertouch, Velocity and Pitchwheel assignments have been added for maximum expressiveness.

Dub N Breaks is available to purchase for the introductory price of $3.45 USD until April 5, 2011.

The All-In-One soundset is now available as well. It contains all 4 Xenos SubBoomBass banks combined into a single set for a total of 142 sounds, priced at $16.95 USD.