Xhun Audio has announced availability of ResonHeart, a physical modeling simulation of a never seen before, experimental, aerophone-based acoustic instrument. 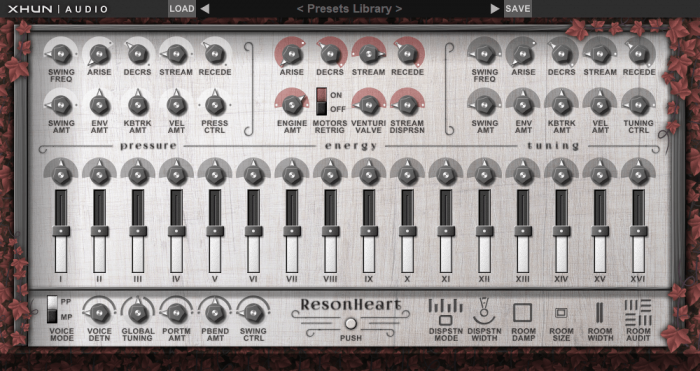 Characterized by a complex modal-based architecture, this original machine has expressly been built to mimic the sound of different families of acoustic instruments – like winds, membranes, chromatic percussions, ethnic lutes and whistles, glasses, cymbals and crashes, vocal ensembles and choirs, or even an entire orchestral strings section – as well as to produce very unconventional, organic tones, evolving textures and expressive motion pads.

Working on the principles of fluid dynamics and designed to potentially be a real-world replicable machine, every single component inside ResonHeart has been modeled after existing hardware – commercially available devices like air pumps, pneumatic valves and metal resonators. Also the surrounding room acoustics has been carefully modeled, simulating a wide range of spatial environments, from small chambers to big concert halls, to stone-walled cathedrals and beyond.

The plugin is also included in the XA Instruments Bundle alongside the LittleOne virtual analog synthesizer and IronAxe electric guitar, priced at 129.90 EUR during the promotion (regular 169 EUR).

This Special Offer is valid until October 13th, 2019