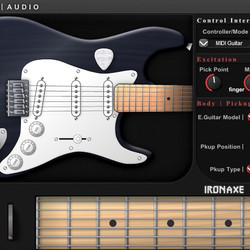 Version 1.6 features the String Router Engine 2.0, an intelligent system for dynamically switching between the 6 simulated strings: according to the current played notes on the master keyboard, this improved engine emulates the behaviour a real guitar performer.

This feature has also a cascade effect that affects the whole simulation, reducing up to 60% of the CPU and Memory hit compared to the previous versions of the software, while maintaining the same sound/audio accuracy.

The IronAxe plug-in for Windows (VST) is available to purchase for 99 EUR.